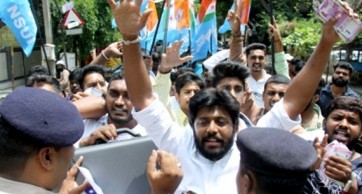 Hyderabad, June 16 (IANS) Congress party's student body, the National Students' Union of India (NSUI) tried to lay a siege to the Raj Bhavan here early Thursday to protest against the action of the Enforcement Directorate against party leader Rahul Gandhi.

Taking the police by surprise, NSUI leaders and workers reached Raj Bhavan, the official residence of the Governor around 5.30 a.m.

Raising slogans against the Narendra Modi government, NSUI Telangana unit leaders and workers sat in front of the Raj Bhavan.

Police swung into action to arrest the protesters and shifted them to a police station.

Police have tightened security around the Raj Bhavan in view of the call given by Telangana Pradesh Congress Committee (TPCC) to stage a protest against what it calls harassment of Rahul Gandhi by the Enforcement Directorate (ED).

Large number of police personnel were deployed to prevent protesters from gathering around the Raj Bhavan.

TPCC president A. Revanth Reddy has announced that a rally would be taken out from Rajiv Gandhi statue at Punjagutta to Raj Bhavan. He urged the party cadres to participate in the rally and the protest at the Raj Bhavan in large numbers.

Police have made it clear that there is no permission for a rally or protest at Raj Bhavan. Police have erected barricades on roads leading towards Raj Bhavan to prevent protesters from gathering there.

TPCC had taken out a massive rally on Monday and staged a sit-in at the regional office of the ED. The protest led by Revanth Reddy continued the next day. As the EC continued questioning Rahul Gandhi for a third straight day on Wednesday, the Congress leaders staged a protest at Gandhi Bhavan, the party headquarters.

Revanth Reddy alleged that the BJP government at the Centre was misusing ED to target Congress leaders Sonia Gandhi and Rahul Gandhi. He called continued questioning of Rahul Gandhi by the ED vindictive politics.